What up, ya wads? You survived the first day! Good on you.

Your spreadsheet is here. If you want a quick reference to your possible voting targets, here you go:

I will field votes and Influences in the order in which they come.

If you screw up and attempt to Influence someone to vote for himself or some crap, you will be dropped from the order in which you moved.

NEW THREAD for all votes and Influences and Wine Card plays, please.

Here we are, CJ faithful: the beginning of another cycle. Can you believe we’re over a year old?

Last year this was called “Rome.” I plan on trying to utilize some of the new rules in this game, though some really only work in person.

I was BSing with Pete about upcoming challenges on the schedule, and I suspect Musical Chairs will be amended or dropped (it’s too easy for the person in the lead to exert power, though that’s not necessarily a negative novelty) and The Power Grid will definitely be dropped unless I figure out a more interesting way to do it.

Pete’s only lukewarm to Bullseye, so I’d like to hear more feedback on that because I sooooorta like it and can either amend it or scrap it and come up with something new (I have a lot of challenges waiting in the wings from Gods and Mortals and the upcoming Survivor game).

The Spread, of course, is practically everyone’s favorite game and won’t be going anywhere.

Let me know if you’re going to play Fall, Caesar and we’ll probably start next Monday.

If you’re reading this post and you have contender points, you are hereby allowed to submit ideas for the Beau vs. kg2005 Championship match. In a day or two I’ll take all suggestions and put them to you for a vote. The match will happen around the 20th or so, if that ends up being workable for all parties.

Bullseye has ended! Grey was the last man standing, but MelissaD was easily the highest scorer of the event.

However, todahshy scored big too, and had enough points racked up that he will be the October challenger for the World Championship.

The Kickstarter for Fall, Caesar is going very, very well. We’re pledged up to $1826 of the $2000 goal. It’s juuuuust fine if we go over, so don’t let the budget dissuade you. Costs for shipping may be higher than anticipated, as I have several backers outside the US. I didn’t see that coming for some reason. Also, there’s still time to have yourself drawn into the game if you pledge $100. Three spots left!

Have you seen uberminz’s second Bi-Curiosities challenge? You should. Scroll down and find it.

greekhouse’s second challenge will come soon, but I don’t want to overwhelm people with content. Now that the mega-game is over, I expect it to hit the front page shortly.

The four-way Grave Robbers challenge should commence soon and I’ll ask those guys for availability within the next week. AMR still has to do his half of Scattergories, as uberminz has been waiting a hella long time.

Spookymilk Survivor over at the other site has been a mind-blowingly good game. You’re probably already following it, but if not, start.

I’m Kelly “spookymilk” Wells, and I run this experimental game site, where players contend for points and championships a la professional sports (and even occasionally give hype interviews). This was the last site where Fall, Caesar (“Rome,” at the time) was tested, and you can find it, as well as other distractions, if you look around a little. Don’t hesitate to comment, ask questions, or even join the games. I can be contacted at foreverunchanged@gmail.com.

My other site, where I run Survivor-style games, can be found right over here.

The Fall, Caesar-specific site is at this link and will be the place for my updates throughout the fundraising period.

Here’s the card back art for the game you know as “Rome” that I am producing through thegamecrafter.com. Art is by Alex Merrill, who’s knocking at the door of the comics industry. 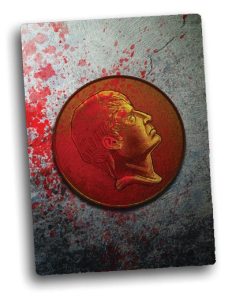 There will be various donor benefits (for $100, Alex will use your likeness for one of the cards), and I hope that the folks that have played my games online for years will consider making even a small donation so we can finish production and get the word out about the project. The Kickstarter page should go up on September 3rd or soon thereafter.

BeauZo Match for the Number One Contendership:
Beau vs. freealonzo
September 2nd, or shortly thereafter

September Mega-Game
Begins September 2nd
Narrowed down to five choices – go to the post, if you care

CJ Championship
kg2005 vs. Beau or freealonzo
Within a day or two either way of the finish of the September Mega-Game

The idea is that DPWY kind of screwed over Geoff and nibbish in the last game, so revenge is necessary. todah would be in the match because he defeated our champion, kg, in the first round of the tournament.

Other folks can come to me with one-on-one matches they wanted to run for a similar number of points. The game would be the same as the one played by Beau and freealonzo, and would run at the same time. All players would still be eligible to join the mega-game.

That’s it for now, folks. I’ll finalize the September mega-game ASAP, as well as the BeauZo match.

Here we go. Endgame strategies are taking shape, and we’re heading for a pretty wild ending, I think.

Pretty interesting at this point. DPWY is essentially able to kill off anyone he wants, or at least ensure his own survival. So, at this point I started waiting for his vote.

So, there it is. DPWY will kill anyone he votes for.

Anything survives but a non-vote! That wouldn’t happen, right???

This leaves four of you.

Well, that was a disappointing day. Fewer comments than players. You guys are ass at this. Except one or two of you.

We have just five contenders who can get to the final two. Winning conditions will be updated tomorrow, probably.

Tomorrow night I’m working again, so it might get late again. Depends on business.

And it ends for Mike. Everyone’s vulnerable except for one! Your targets:

I can’t right now, but tomorrow I’ll try to cover winning scenarios when I post.

The first one to get two votes was DG, and both of the people voting for him were in power. Farewell, Brooks.

Challenges run by adobery, greekhouse and uberminz will net you points as well. They are on no schedule but the ones inside their heads. #1 Contenders for the title are determined by who's got the most points when the monthly mega-game ends.