Just as things started to slow down around here, I’ve cooked up another weird puzzle for you to glance at, get annoyed with, ignore, and/or earn points from! And check it: it’s another crossword! Kinda like the last one too, if you think about it: no numbered clues, circles in some of the squares. This time, though, I wanted these clues to be, literally, normal crossword clues. Does that make it easier?

No. It does not, and I’ll tell you why. Before entering your words into the grid, you need to add a letter to the beginning of each answer, forming a different word entirely. No letters added in this way are repeated, so you won’t have two words, say, that both get “F” added to the beginning. Which letter gets added to which response is up to you to figure out. Once the grid’s filled out, the circled letters can be rearranged to form two appropriate words, and those TWO WORDS are the final solution for the puzzle.

We’ll be awarding points on a sliding scale, same one used for the previous Curiossword. Guesses and hints are free, and I’m going to set a firm limit of THREE hints per solver. Two weeks to solve this means solutions are due on November 27. Grid and clues after the jump. Good luck! 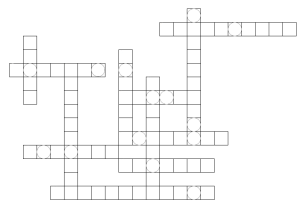